Fukui Prefecture is located in the center of the northern side of Honshu, the main island of Japan (Fukui population: 800,000 people, area: 4,200 km2 )

In Fukui Prefecture, there are over 160 non–profit organizations (NPOs) which are working to conserve, restore, and use satoyama landscape. This map shows five regions where fishermen, municipalities, NPOs and private companies are cooperating to restore nature. 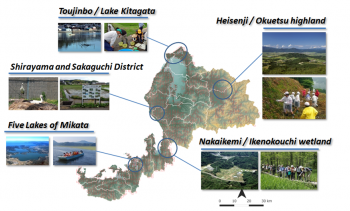 Since 2010, we have been raising a pair of storks in this district to reintroduce the stork in Fukui.
In June 2014, three baby storks were born. We are planning to release these individuals into the wild in the future.

In Shirayama and Sakaguchi districts, farmers have cultivated rice without using pesticides and chemical fertilizer. They seek to increase the number of fish and frogs that are potential prey of the stork.

The rice cultivated in this area is named “Calling-back-stork Rice”, which is  known as a high-quality brand.

The Five Lakes of Mikata exhibit a typical satoyama landscape, providing habitats for rare and endangered animal and plant species.
The lakes were registered under the Ramsar Convention in 2005 because of their biodiversity including some endemic species.

The nature restoration committee was officially established in 2011 for the Five Lakes of Mikata, composed of various parties including farmers, fishermen, NPOs, scientists, municipalities, and more.

Now, the committee is implementing various projects, such as making fish-ways into the rice paddies, restoring the clam population, and removing invasive species.


The 2013 SATOYAMA Initiative International Convention was held from Sept. 8 to 14.
The 4th Global Conference of IPSI in Fukui and other related events were also held in Fukui.
Over 2000 people from 28 countries and areas participated in these events.
130 participants discussed Satoyama conservation issues.


After the Fourth Global Conference of IPSI last year, in order to improve the activities for nature restoration in Fukui, we established the Fukui Prefectural Satoyama -Satoumi  Research Institute, located within the boundaries of the Five Lakes of Mikata.
The Institute is working based on three action policies on scientific research, environmental education and collaboration with local communities.

○Providing opportunities to learn about satoyama & satoumi to encourage both children and adults to be conservation leaders.

○Supporting and working together with people in local communities who are trying to conserve satoyama & satoumi.


The institute has already started some activities.

For example,Bamboo forests in Satoyama areas have increasingly been abandoned and wild boars inhabit the overgrowth. These boars damage the cultivated areas nearby.
The research institute set up the “Fukui Manabi  Forest” program near the Five Lakes of Mikata, in which researchers, nature restoration groups, and community residents cooperate to manage forests based on scientific viewpoints.


At the bottom of Lake Suigetsu, sediment with annual lamination (varved sediment) has been deposited for approx. the last 70,000 years and thus holds a continuous archive of palaeoenvironmental information.

The varved sediments will be used as a powerful tool to further understanding of the relationship between the changes of the natural environment and human activities.

We hope that this treasure of  Fukui will play a role in the revitalization of the local economy.